This newspaper has previously reported on the life and untimely death of former editor Arnulfo T. Garcia. However, Garcia was much more than editor of the San Quentin News (SQN), he was a towering visionary and dreamer.

Unlike most dreamers, he had the rarely bestowed persistence and determination to carry out his dream. The result was the newspaper’s Social Forums and the respect of news organizations from around the world.

Under the guidance of Garcia, the San Quentin News transitioned from being a reporter of news to being a source of news. Through the News forums, Garcia was able to let criminal justice decision makers experience the results of their decisions.

Those decision makers were then able to get feedback from inmates regarding inmate families and the communities. The reach of Garcia’s work went well beyond the prison walls. His determination to make SQN into a respected source of criminal justice information cannot be overstated. 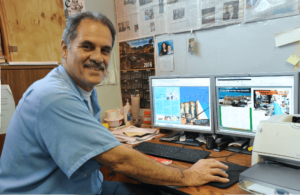 As a former writer on this newspaper, I had both the honor and pleasure to know and work with Garcia. Arnulfo’s powerful impact on inmates and aspects of the corrections system, led me to believe that Garcia’s dreams were built on a solid foundation. He had expansive dreams and wanted to provide solutions and reforms that would generate results, not more effort.

Arnulfo’s idea related to reentry facilities and expanding San Quentin News as the voice of the voiceless. He wanted to address inequalities created by flaws in the criminal justice system. One of the biggest difficulties for paroling inmates is successful reentry back into the community. As Arnulfo and his family grew up with horses, he knew the value of caring and providing for horses as a way to learn responsibility.

With over 150 years of combined horse experience, the value of horse sense is well recognized in the Garcia family. The Arnulfo T. Garcia Foundation associated with the Horse Club to allow paroling inmates to experience the responsibility associated with being an equestrian.

The Horse Club is a membership association providing sanctuary, refuge and a retirement haven to horses for which there is no caretaker. By teaching parolees how to care for horses, the Arnulfo T. Garcia Foundation believes that Arnulfo’s dream and mission will be fulfilled. Paroling inmates will learn to provide for horses while learning to reenter the community as a contributing member.

From illegal immigration and reentry facilities to criminal justice news, Arnulfo had broad and extensive ideas to be part of the solution, not part of the problem. He continuously reported that it all begins with acknowledging responsibility for our actions. From that basis, Arnulfo taught that one can then begin a new journey of progress.