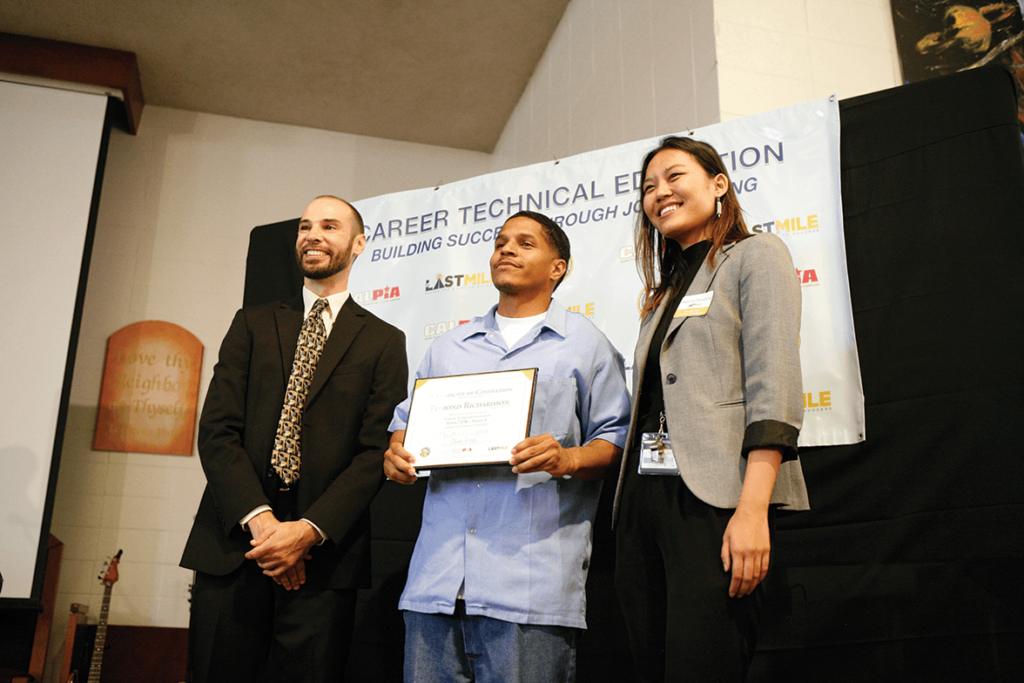 More than a dozen inmates sat in the front row of a prison chapel on June 15 to graduate from one of three well-regarded 21st century training programs.

Looking past the graduates to the men who had recently arrived in San Quentin, Warden Ron Davis said, “those of you not familiar with this prison, the guys in blue, this is a celebration of great programs.”

Formerly incarcerated San Quentin alumni, accompanied by Bay Area community members and business executives, made up the rest of the nearly 400 people in the audience.

Speaking about rehabilitation opportunities, Davis said, “We’re that place. We are ground zero.”

Inmates in TLM Works earn the highest wages, at $16.49, of any prisoner in the country. The average prison wage in California is under $1 per hour.

“Never before have I had so many students in my class who transferred to San Quentin from other prisons,” classroom facilitator Jonathan Gripshover said. “Each of these individuals went through a rigorous process to convince the powers-to-be that they deserve to be in this program above so many other applicants.”

“When I walk into the classroom every morning, I forget that I’m in prison,” Levin said. “You can’t put a price on that.

“The program gives me something of value, because I’m giving back to the community,” he added. “It shows the rest of society what prisoners are capable of doing. It gives us a chance not only to showcase our skills, but also our humanity.

“It allows us to interact with people who may be our employers when we get out.”

MC Hammer, a musical entertainer and a board member of TLM, spoke to the graduates, praising the development of the programs.

“The work that everyone is doing is paying off,” Hammer said. “There seems to be a really nice energy in the air — there’s a better spirit in this room, than there is out there.”

Kenyatta Leal, a member of TLM’s staff currently works to expand the program to other prisons in the nation. He recently visited the governor of Indiana with TLM founders Beverly Parenti and Chris Redlitz.

“I will make everyone willing to invest in giving me a second chance, very proud”

“This day means so much to me. It has proven to the world that change is possible when CDCR is allocating resources to programs — it is changing lives,” Leal said. “I look forward to more programs like this in the future.”

“The Last Mile shows the progress that we’ve made by setting the foundation for more men and women to come out and be successful,” Darnell Hill added.

Hill works for a reentry organization that combats homeless, strives toward meaningful employment.

“My role in Centerforce is to be a case manager to men and women transitioning back to their families.”he said. “I also hold parenting classes.”

Hill made a point to say that he’s concerned about the intersection between the criminal justice system and the youth, which is why he took a job as an “impromptu youth court judge” in Alameda County. This opportunity allows him to help to prevent teenagers from getting their first criminal case in an Alameda court.

“Use your time here wisely to be a success,” she said, addressing new graduates. After certificates were awarded, media representatives, business executives and inmates walked out of the chapel and down a hill that led to the Lower Yard. They filed through a 30-foot gated wall that separates the Lower Yard from classrooms, newly built, by the construction labor students. Code.7370 graduates and TLM Works developers sat at their stations to show off their accomplishments.

In honor of Prison Industry Board Vice-Chair, Darshan Singh, the classrooms bare his name.

Yu Chen, 55, has been at San Quentin for 13 years and in the coding program for about six months. He’s working on a program he’s named CSS Zen Garden.

“It’s a program that takes any kind of content and re-organizes it to look more aesthetic to the eye.”

Michael Holmes, 60, has been at San Quentin for about six years. He’s new at coding. Holmes is developing an app to help parents tutor their children.

“As a child, I didn’t feel like I was nurtured,” Holmes said.

The app that he developed helps people develop their skills in a nonviolent manner. It helps them build a better world, one neighborhood at a time.

TLM Works WEB Developers Harry Hemphill has been in the coding program for five years.

“The president could rest assured that there is no fake news in the SQ News,” Hamphill said to laughter and applause. “It gave me a strong sense of giving back to incarcerated people.”

Hemphill goes home in less than a year.

“I will make everyone willing to invest in giving me a second chance, very proud” he said.

Hemphill said he’s also proud to have worked on the website of Dave’s Killa Bread, a company committed to hiring returning citizens.

The Bay Area native said there is an advantage of teaching prisoners highly touted skills like coding.

“It’s an opportunity to start my life again and gain multiple skills to help my family when I parole,” Thao said.

Thao is scheduled to appear before the parole board late this year or early next year.

A First of its Kind Public/Private Program

The goal for the privately run TLM is to break the cycle of incarceration — key is a successful reentry program, tied to a good job.

TLM Works is part of a CALPIA joint venture program that employs inmates to work in industries at competitive wages.

Code.7370 is part of CALPIA’s CTE portfolio and to date, is one of the most effective rehabilitation programs in the country.

KQED reporter, Sandhya Dirk, volunteers as a sponsor of the San Quentin chapter of the Society of Profession Journalists.

“To me, what makes San Quentin special is that it is a lavatory for a space for rehabilitation where people can learn and become better human beings,” Dirk said. “Programs like The Last Mile and coding show what can happen when you believe in people instead of just locking them up.”