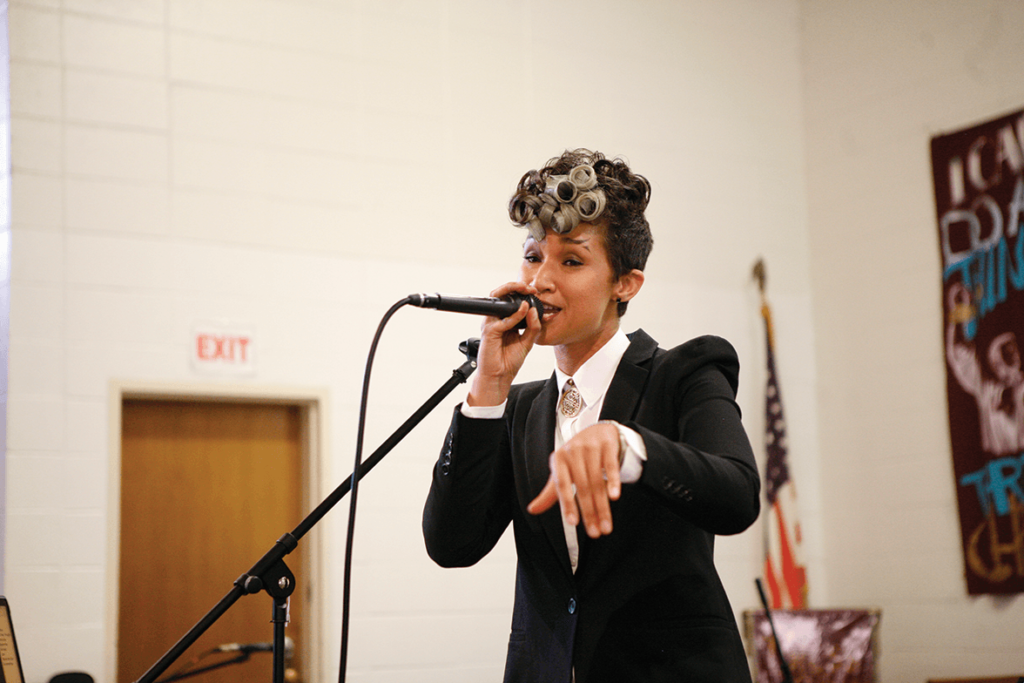 Butterscotch performs in front of a packed house

A crowd of incarcerated men cheered like it was their parole day when Antoinette “Butterscotch” Clinton took the stage at San Quentin State Prison June 14. This time, she returned with Grammy-nominated artist Ryan Leslie.

The musical genius turned a prison chapel into a concert, a reunion and a pre-graduation celebration for computer coding and construction apprentice trainees.

Curtis “Wall Street” Carroll hosted the event that served as a pre-graduation reward for the coders and construction apprentices.

Brian Rogers on the bass

Chris Redlitz founded the Code.7370 program with his wife and partner, Beverly Parenti. Code.7370 teaches computer coding and offers the highest wage for an incarcerated person who completes the program and is hired to work while still in prison. The concert was open to the first 378 people to arrival at the chapel.

While the crowd filled the chapel to standing room only, Butterscotch, Leslie, Redlitz and the band held a meeting at the back of the platform.

As Abercrombie played “Break the Mold,” all ears tuned into his lyrics about breaking the cycle of poverty and self-destruction. He received a standing ovation ― the first of many for the night. Abercrombie ended his impromptu three-song set with “Feel Me” and “Dying to Live.”

“He was dope,” Butterscotch said. “Listening to him, I wanted to lay some beats down to his lyrics.”

Carroll introduced the guests by first asking them questions. Carroll asked Leslie what motivated him to play for the guys incarcerated at San Quentin.

“There’s no place in the world I’d rather be than right here with ya’ll,” Leslie said. “Chris brought me here last year to speak, and I left a changed man. I saw determined and passionate people here.”

Redlitz invested in Leslie’s SuperPhone business, a company that created an app that uses text messaging to connect directly with fans and consumers. Leslie graduated from Harvard at the age of 19 and created the app to communicate better with fans.

Carroll asked Butterscotch, “What defines your style of music?”

“I always want my music to have a message to anybody who has ever been through what I’ve been through and to send hope, love and peace out into the world,” Butterscotch said. “I want to be there for you guys ― it’s about love and acceptance.”

It was Butterscotch’s second time performing on that stage. Two years prior, she collaborated with Jassy and wordsmith Cavitt.

Cavitt, who paroled from San Quentin in 2017, surprised Butterscotch and the crowd by strolling back into the chapel.

“It feels like I’m home,” Cavitt said. “This space ― everything here has a story to me. I was here eight years.”

Cavitt was a former member of Redlitz and Parenti’s Last Mile entrepreneur program. While still incarcerated, his spoken word piece played behind John Legend, via video, during a TED Talk. This time, he performed Why the Cage Bird Screams dressed in a burgundy button-down shirt and sharply creased slacks instead of prison blues.

“I live in society that kills people who killed people, in order to teach them not to kill people,” Cavitt spit. “… imagine a world where healed people would heal people.”

Next, Butterscotch took the stage and started with the beat boxing that earned her a finalist spot on America’s Got Talent. In all, she played a jazzy six-song set mixed with R&B and Hip Hop.

Bass guitarist Brian Rogers from Sacramento joined in for “September.” At times, Butterscotch looped her voice, then beat-boxed, sang and played the guitar simultaneously. At one point, the audience heard a saxophone, but it turned out to be Butterscotch’s mouth.

“Nearly 7 in 10 support clearing the records of people who complete their entire sentence if they remain crime free for seven years.” “SAFE AND SOUND” by Californians For Safety and Justice Nov. 2017

In honor of her grandmother, she ended her set with a rendition of “Summertime,” Butterscotch style. The crowd gave her several standing ovulations and shouts of support.

“Ray Charles ain’t got nothing on you,” someone yelled.

Jassy came to the stage in dramatic fashion with the sound of helicopters playing as he skipped down the aisle to start his set with a remix of his song “Freedom”. It has been viewed nearly 110,000 times on Youtube. He followed with “All of a Sudden.” The song that brought down the crowd was “Swenglish,” which he rapped first in Swedish, then in English with a rapid-fire delivery.

“This is one of the best performances of the night,” Brian Asey said.

Jassy’s set merged into Leslie’s opening song, “Addiction.” He rapped while native Gabe Lambirth rocked out on the guitar, and Leslie, inspired by Butterscotch, tried his hand at beat boxing.

As an intro to each song, Leslie gave the audience context. Before performing “Ups and Downs,” he spoke about making the decision at 15 years old to change his major from medical to music. The decision left him struggling. At one point, he was homeless and had to sleep behind a barbershop.

“When you’re at your lowest point, there’s the beautiful realization that there’s nowhere to go but up,” Leslie said. 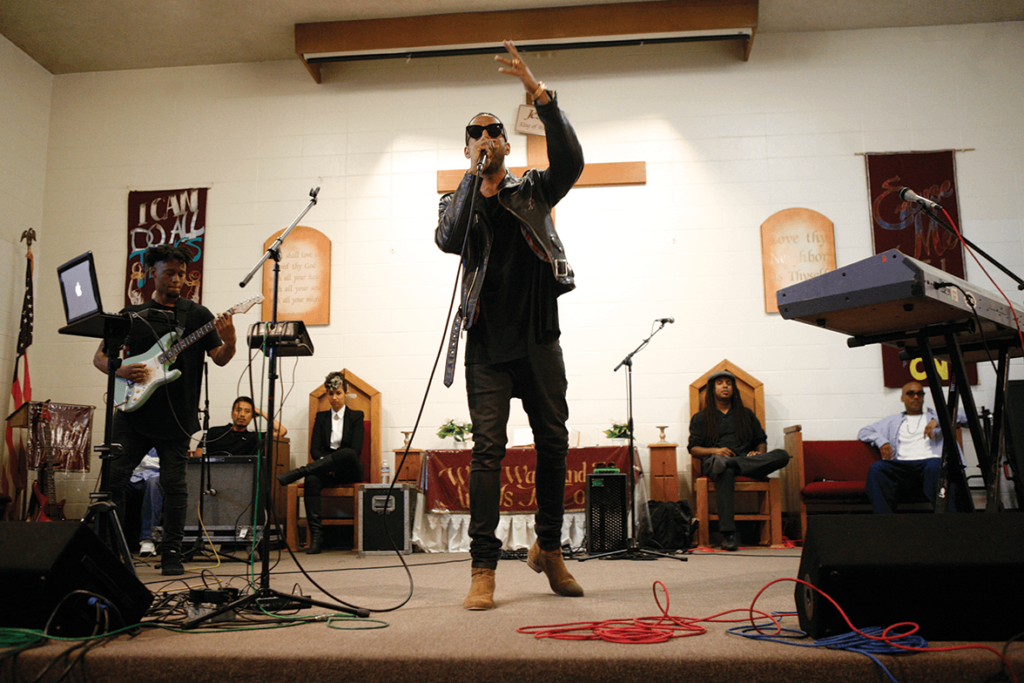 He also sang, “Something That I Like,” “Paris,” “History,” “Realize” and “Breathe.” He also premiered “Run it Back” at San Quentin.

He said he performed “History” and “Realize” because the songs fit the occasion.

“You have a song like ‘History,’ and we have this historic moment at San Quentin. ‘Realize’ is about the power of the human spirit,” Leslie said.

Leslie decided to share his music with the incarcerated population because, “I believe that everyone matters, no matter what their background is; they’re human beings with souls. We all deserve a second chance.”

Many people who tried to see the concert were turned back after the chapel reached capacity, and several others had to leave early for close-custody count. Leslie plans to make sure that doesn’t happen next time.

“I’m coming back with a whole band, and we’re going to do it on a Saturday on the yard where everybody can come and nobody has to leave,” Leslie said.

Butterscotch has an album out called “Scotch Tape.”

Leslie has several, starting with “Ryan Leslie” and including  “Transitions,”  which was nominated for a best R&B album Grammy. Afterward Leslie dropped three rap albums back-to-back: “Les is More,” “Black Mozart” and “MZRT.”

Jassy is finishing a mixed-tape he produced with young men on the yard who were challenged to rap without profanity, called the “YOP Mixed-Tape.”

For More Photos see below.

Lack of felons’ ability to vote strips away fundamental rights